Design a site like this with WordPress.com
Get started
Skip to content
Date: March 11, 2019Author: clanmccrackengaming 0 Comments

For a while now, I’ve wanted to write some reviews for the Marvel Cinematic Universe movies and post them online, but I was never really sure if I should, or if it even belonged on this kind of site. But after watching Captain Marvel this weekend I really wanted to voice some opinions about it and here we are. In this segment I will talk about my opinion and giving the movie my score, out of 100. I’ll try to keep all spoilers clearly labeled and confined to specific sections so that if you don’t want to read them you don’t have too.

Because Captain Marvel is so fresh in my memory let’s start there and work our way back.

Captain Marvel was great movie, one that I enjoyed immensely and would be willing to pay theater prices a second time to experience again.

Where should begin to sing this movies praises? Brie Larson did an amazing job as Carol Danvers. She convincing pulls off the ‘amnesiac warrior with a mission’ role without issue, while also not get locked into the single mindset of combat. She proves that the character is multifaceted and complex while also not taking crap from anyone. Throughout the story and flashbacks it really gets reinforced that the character is tenacious and ‘Quit’ is not in her vocabulary.  Once sequence in particular hammered this image home,  where the primary antagonist is attempting to break Carol’s resolve by showing her all the times in her life that she failed, and after that you see Carol, at various points in her life, standing back up in the same pose, with the same look on abject defiance on her face. It just screams “You will not keep me down” and “Strength of Character”.  I was so forcefully reminded of Captain America in these moments that if someone were to tell me that Captain Marvel would be taking over as Leader of the Avengers after Chris Evans decides to leave the roll, I would not have been surprised or upset.

Samuel L Jackson reprises his role as a younger Agent Nick Fury (The movie takes place during the 90s). This was accomplished by digitally de-aging Sam, and it was done very well. There were only a couple instances where I could even tell that I was looking at CG instead of seeing Sam’s actual face. The chemistry that Jackson and Larson share on screen was something to behold. It really came off as if the characters had known each other forever and were old campaign buddies. Even seeing Fury fawn over the cat, Goose, was hilarious and enjoyable, even if it was overdone a bit.

Carol’s costume was well presented and perfectly functional for combat. I’m sure it had some special properties, being a super advanced Kree battle suit, but it resembled nothing more than a leather padded combat suit. Both the male and female Kree wore the exact same suit and there were no stylistic changes for fan service or to sex up the females. It was shockingly refreshing to see a female in practical attire for the duration of the movie. Even when not in the combat suit, Carol never wears anything that would be inappropriate for the weather or situation. Another trope that I was glad Captain Marvel avoided was that at no point did Carol have or acquire a romantic interest. There was no pining over a lost love, or an acquisition of a new one. Danvers is on a mission and doesn’t have time for that superfluous nonsense. 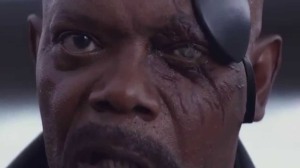 Even as this movie did so many things right, there is always going to be some down points, minor as they are. During the movie it is shown how Fury loses his eye. The moment is played for laughs and comes off as a bit out of character. Also, Carol isn’t referred to as ‘Captain Marvel’ at any point in the story. If you didn’t know who the character was going into the movie, you just don’t get to have that piece of information. Is this becoming a trend? They did the exact same thing to Wonder Woman in Batman vs Superman

Outside of that one small instance though, everything else was well written.

Captain Marvel was an absolute joy to watch. Between the visuals of her abilities, and the manor with which Brie and Jackson handled their characters I cannot say enough good things about this movie. The twist with the Skrulls was not something I, as a long time marvel fan, was expecting. The movie kept me on my toes, and really cranked the hype up to 11. It was so satisfying to finally get a female superhero whose primary attribute isn’t ‘sexy’, and I cannot wait to find out how she handles Thanos.

The Stan Lee Tribute in the opening logo was absolutely feels inducing. I honestly hope they keep that around for a while.

Overall Rankings within the MCU